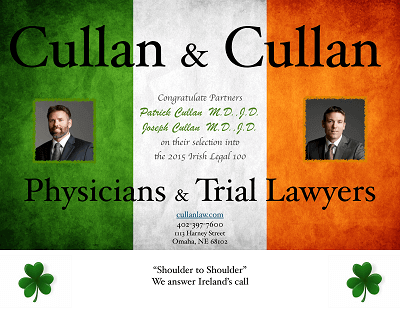 We're proud to announce that Dr. Patrick Cullan and Dr. Joseph Cullan have been named to the Irish Legal 100, an annual list of the top Irish-Americans in the legal field.
"It is an incredible honor to have been selected to join this elite group of legal professionals," said Patrick Cullan. "Being of Irish descent and having lived in Ireland, being named to the Irish Legal 100 is a tremendous honor both personally and professionally."

Dr. Patrick Cullan and Dr. Joseph Cullan each graduated from the Royal College of Surgeons in Dublin, Ireland. Founded in the early 1700s, the college is a world leader in medicine, surgery, and obstetrics study. Both began practicing law in 2000. Along with their father, Daniel B. Cullan MD JD, they're among the first doctor/trial lawyers in the country.

Over the past decade and a half, Cullan & Cullan LLC has secured tens of millions of settlement dollars for our clients. We've obtained Nebraska record-breaking settlement amounts. Recently, we settled a personal injury case for a man paralyzed in a car accident for $19.6 million. We also settled a $17 million verdict in the case of a child who suffered cerebral palsy at birth.

Cullan & Cullan LLC has helped many Nebraska injury victims over the years. We have a proven history of securing the highest settlements possible in personal injury cases. Contact us today at (402) 882-7080.