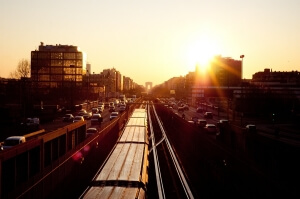 It's normal for people to get nervous when they're driving next to semi-trucks. With that huge exterior and a tractor-trailer following behind, what's not to be scared about? Fortunately for the general public, tractor-trailer drivers must adhere to safety rules set forth by the Federal Motor Carrier Safety Administration (FMCSA).

In addition to this, big rig drivers face certain liabilities pursuant to Nebraska legislature if they get in accidents. As an example, let's explore a recent tractor-trailer collision in Omaha.

According to The Grand Island Independent, a semi-truck was recently hit by a train. Javier Mancilla, a driver for the Anton Kristijanto trucking company of Dakota City, was hit by a Union Pacific train near Chapman.

The collision was marginally caused by a fatal two-vehicle accident that had happened earlier. The previous accident took place two and half miles west of Chapman. The police diverted traffic, including the semi-truck driver.

When the driver came to a railroad crossing, he disobeyed the light directing him to stop and continued on. When he passed the middle of the tracks, the train collided with the trailer, causing the truck's inventory to fly out. Boxes of pork were strewn everywhere, but fortunately, no one was hurt.

Why Does This Matter?

According to Lieutenant Phil Theade of the Nebraska State Patrol in Grand Island, the driver was cited with an infraction for failure to obey a train crossing signal. So, why does this matter?

In most vehicle accident cases, a common misconception is that the person who got hit will "win" the case, while the other party will be held liable. That is simply not true. Liability depends on who violated regulations and put the safety of people around them at risk.

Furthermore, this case illustrates that while truck drivers must follow their own set of safety guidelines, they also need to obey the same laws that average drivers do.

If you have been hurt in a truck-related accident, Cullan & Cullan LLC may be able to help. We are personal injury attorney who have extensive experience with accident cases, and we may be able to get you the compensation you deserve.

Do not hesitate to call us at (402) 882-7080 for a free case evaluation. With our contingency basis, there is no cost, guaranteed. Our fee is paid directly from a percentage of the amount we recover from your claim.