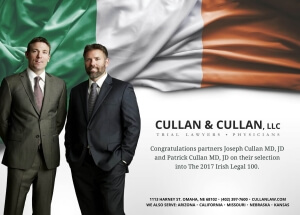 For the second year in a row, brothers Patrick Cullan and Joseph Cullan have been chosen for the Irish Legal 100, an annual publication of the most distinguished U.S. lawyers with Irish roots. 2017 marks the 10th edition of this list, which was started by the Irish Voice newspaper in 2008.

"This annual compilation is chock-full of great legal minds from coast to coast, who first and foremost want to celebrate their Irish heritage," says Debbie McGoldrick, senior editor of the Irish Voice.

Patrick Cullan and Joseph Cullan, physicians and trial lawyers from Nebraska, will be there. They are being recognized for their exceptional work as personal injury attorneys - and their proud Irish heritage.

Since 2000, Patrick and Joseph have been practicing personal injury law. They began their legal careers alongside their father Daniel B. Cullan, MD JD, one of the first trial lawyer-physicians in the U.S. In addition to completing law degrees, both Patrick Cullan and Joseph Cullan performed obstetrical training in Dublin at Ireland's National Maternity Hospital, receiving degrees in medicine, surgery, and obstetrics. They were physicians before turning to the law. Because of this scientific insight, they have been able to get astounding results, including the largest medical malpractice verdict in Nebraska history, as well as a record $19.6 million verdict for a paralyzed Montana man.

Patrick and Joseph intend to continue their father's legacy, fighting for the rights of victims - and being proud of their Irish heritage. They specialize in catastrophic injury cases, and are licensed to practice in Arizona, California, and Nebraska. You can learn more about Cullan & Cullan LLC here.